turkmenistan and places to visit

a guide to turkmenistan and what places to visit

This is a guide to Turkmenistan and the best places to visit while you are there. If you are lucky enough to have been granted entry into this most secretive of countries.

Before I started my Turkmenistan adventure, I was told the place is like North Korea and Las Vegas.

I’ve been to Turkmenistan I get it. Therefore it almost felt like I was in the Truman Show with Jim Carrey.

Due to its segregation from the outside world. It is one of the least if not the most untravelled of all the Stans, but one of the most interesting by far.

I think one of the biggest attraction of all is the chance to look behind the curtain and see into a very mysterious place.

Turkmenistan is run by a regime, which has absolute control over everything in the country.

Officially, they encourage tourism, but the requirement of travelling with an expensive guided tour and policemen watching your every move may discourage regular travellers from visiting Turkmenistan.

We were lucky to get a three-day transit visa while we were in Iran, this is the cheapest and best way in my opinion. It means you don’t have to have a guide with you and you can roam freely around the country, I use the word freely loosely!

You can to go through and leave at certain places and you have three to five days to get across. This is painful for a cyclist who has to cycle through the desert covering 100 odd km a day, and if they miss their exit date, they get deported.

A quick tip about money is that there is a black market and locals love the US dollar. So take Dollars into the country and exchange while you are in. Don’t do it on the border, they always rip you off. The official exchange rate is not the one in real life.

Turkmenistan is a country under a dictatorship. Therefore, that comes with laws that you should be wary of. These include bringing up politics or the President.

The first president gave up smoking in 1997, and so he banned smoking for everybody else too, just to give you a flavour of the sort of place.

Be very careful about taking photographs in Turkmenistan. If you’re not sure of taking a photo of a public building, especially in Ashgabat. Do check with the police, which will inevitably be watching you anyway.

I got caught, and they made me delete my photo’s.

Don’t bother with the internet while you are there, because it is more hassle than its worth 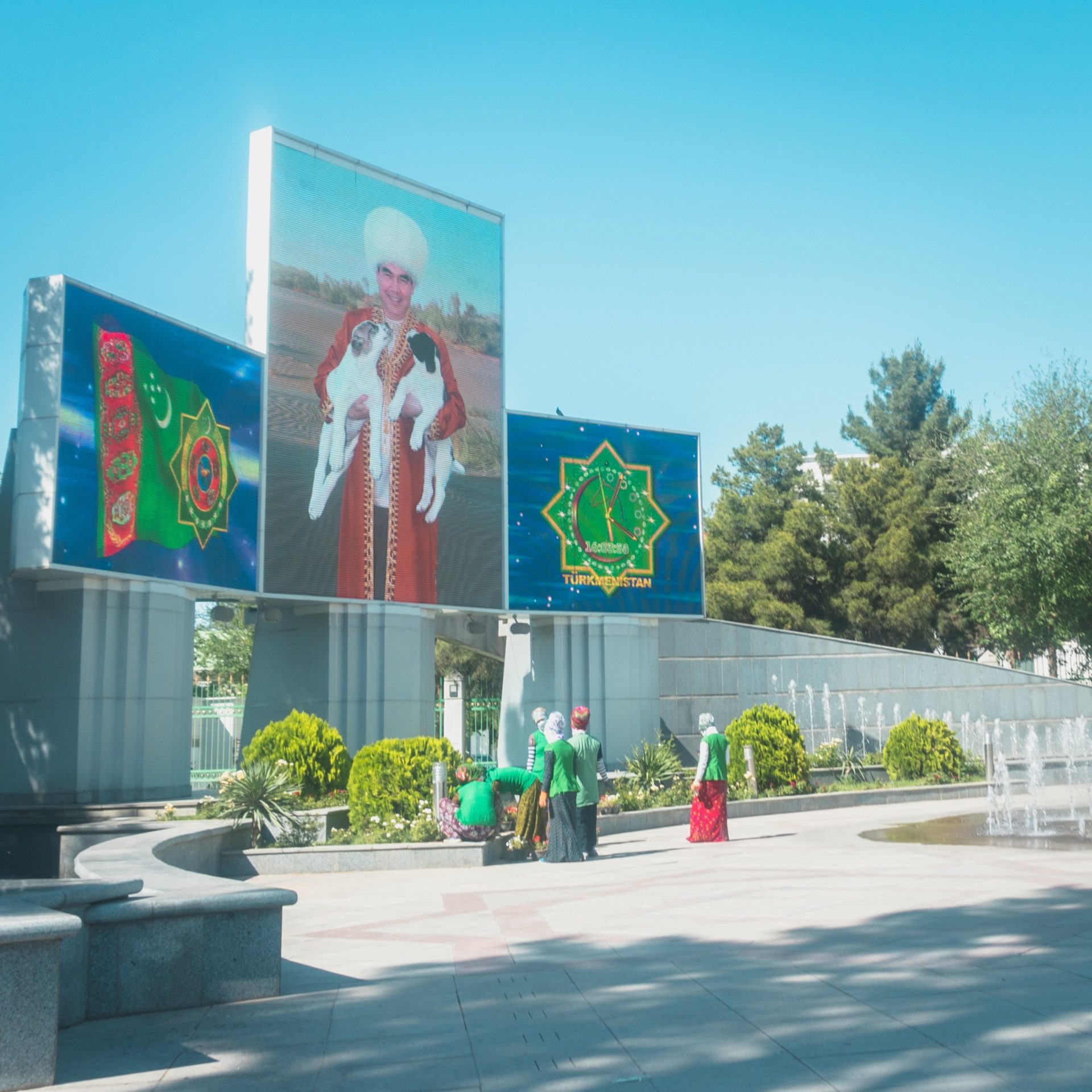 Picture of the President holding some puppies

Coming in from Iran If ever there was a city that commanded a presence, it would be Ashgabat.

I have never seen a place with so little life, the roads are empty, the parks are empty. The comparisons with Pyongyang and Vegas are warranted, so definitely one of the places to visit while you are here.

All around you are wealthy, massive, grandeur buildings constructed in white marble. Beautiful fountains are full of clear running water. Landscaped green cedar trees lining every park walkway. But no people.

During our time in Ashgabat, we saw mostly military guards, who are on guard outside every significant monument and cleaning women. Women were wearing the same sort of outfits, men were in white shirts. The place is just weird.

Out of Ashgabat on our way to Merv, Merv is one of the places to visit. The white shining marble was behind us and now very much a desert as we head towards Merv.

Merv was discovered by Alexander the Great, this was to take advantage of the abundance of water. It’s an incredibly strategic location between the Afghan highlands and the desert lowlands.

It was a famous capital city for over 2000 years and became one of the most prominent cities on the Silk Road. Once known as the ‘Queen of The World’ it is now a UNESCO World Heritage site and is one of the most investigated archaeological sites in Central Asia.

Merv in her prime as a centre of religious study and trade would have been ranked alongside other great Islamic cities as Damascus, Cairo and Baghdad.

The combination of ethnicities and faiths who lived together in this city, is what made it vibrant, bustling and the fascinating city of the past. The peak of Merv’s history was as a vital seat of learning and the easternmost capital of the Seljuk Empire in the 11th and 12th centuries.

Brutality came to Merv in 1221, when the Mongols devastated the city and the population. It is believed that over a million people were killed in that year alone.

In the 15th century, a new city was created, free of Mongol occupation, by the Shah Rukh, the leader of the Timurid.

Unfortunately, history wasn’t right, and more wars continued to destroy Merv. In the 18th century, Merv fell into ruin by the invading Russians, who arrived in 1885, did nothing to revive the city. 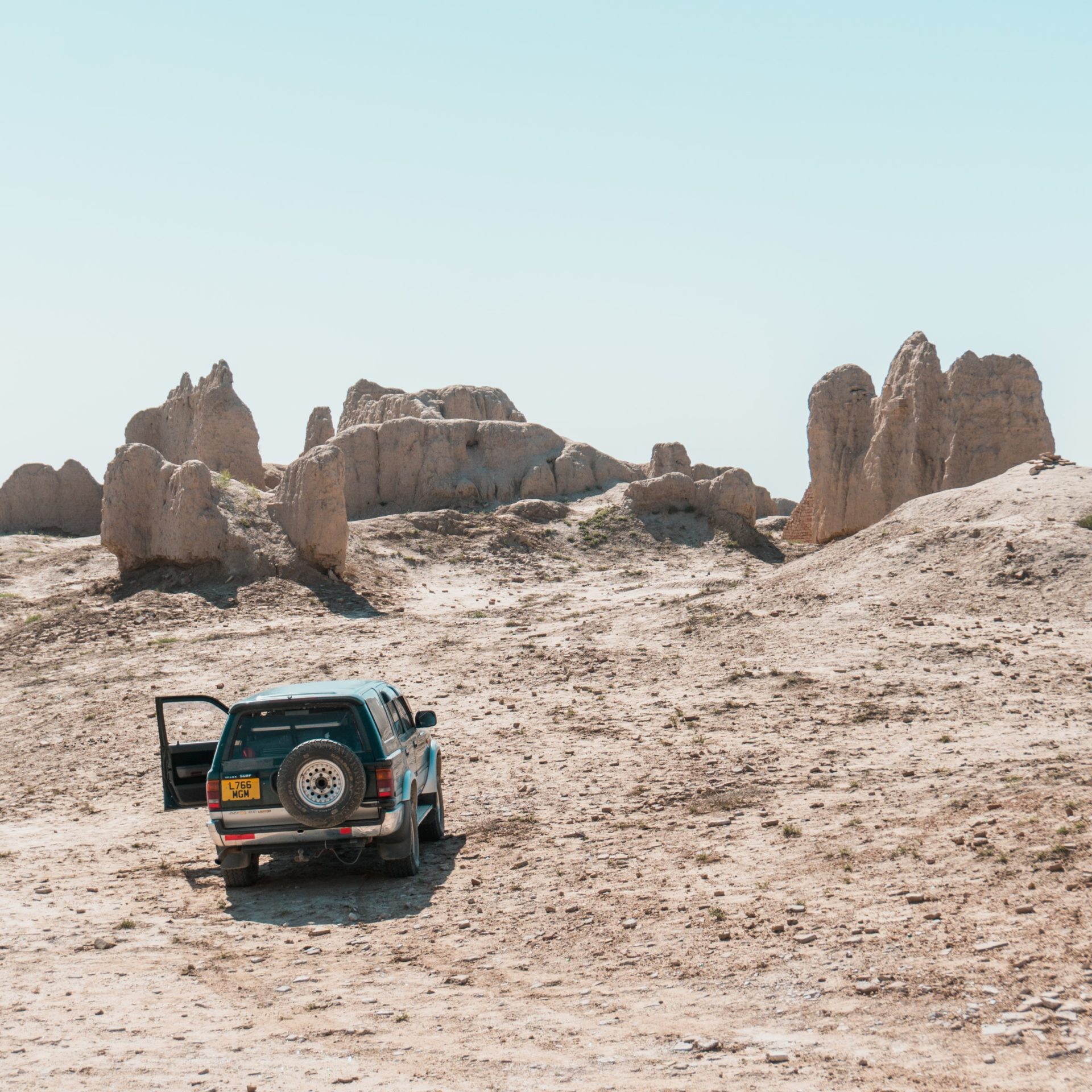 In the centre of a Merv Ruin

After a night in the desert, we gave up the search for this long lost ruin. We decide to move on and went for exploring the city of Merv.

There are many parts to Merv, so below is a brief overview of the five cities of Merv.

Erk Kala – the earliest of the five cities of Merv

The Erk Kala fortress is a vast monument to lost power. It would have served as the centre of life in ancient Merv with the city square secure within the solid walls. It is now just a massive mound of mud brick and sand made smooth by the harsh heat and weather.

The site has archaeological artefacts in abundance and pieces of pottery, material and bone from thousands of years ago can often be found having been recently uncovered by erosion, wind and the footsteps of visitors.

Gyaur-Kala – the second city of Merv

This is one of the most significant structures in the city and covers over 300 hectares of land. It is an extraordinary example of ancient architecture and appears to be a city within a city with towers and entryways on each wall.

This is the medieval area of Merv. It is the incarnation of the town which was destroyed in the massacre, and devastation, wrought by the Mongols in 1221.

The ruins are a haunting memorial to the people, nearly a million, who died that year.

The 38m-high Mausoleum of Sultan Sanjar, located in what was the centre of Sultan Kala, stands out as one of the last remaining tombs which started renovation after 1990. It is now a listed as UNESCO World Heritage Site.

This is the city which marked the re-invention of Merv by the Timurid Empire in the late 14th century. It is 1km south of Sultan Kala.

The newest of the five cities and built to the west of Abdullah-Khan Kala. The ruins are set out in a rectangle and were built in the 18th century. By the time the Russians arrived in 1885, they were already abandoned. The bricks were used for new construction by the most recent invaders.

It doesn’t look much like a castle now, and the only indication of its prominence is the elevated position and size. This single-storey mansion type house was the residence of a powerful Merv family between the 9thand 13th centuries.

The Great Kyz Kala is a fortified building that is thought to have been built in the 7th century. Its purpose and use are mysterious, but it is one of the most well-preserved buildings in the city.

Recent excavations have discovered rooms, flooring and a staircase so it may have been the home of someone mighty.

After the day exploring, we headed to Turkmenabat, where we stayed for our final night in Turkmenistan. 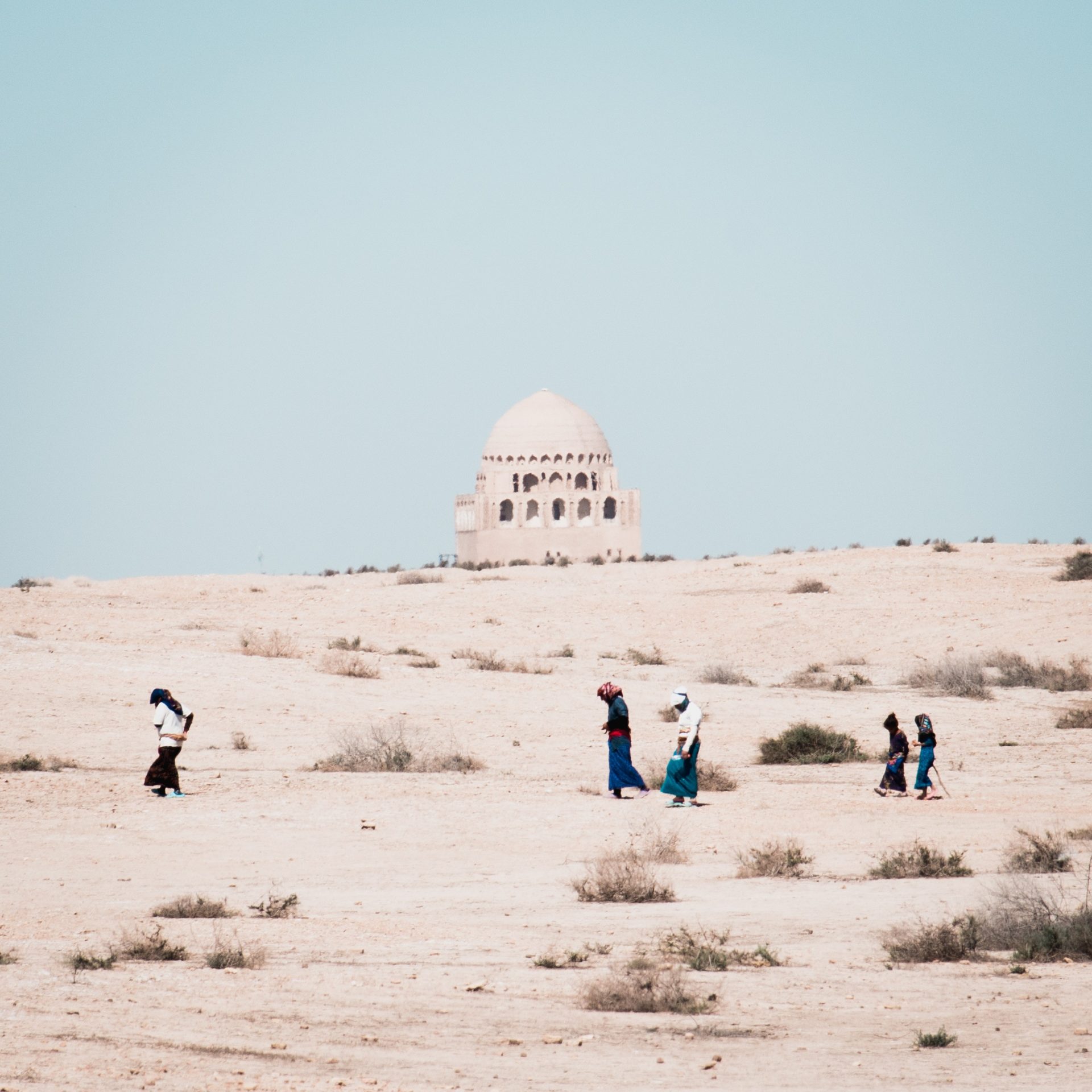 The city of Merv

My feelings about Merv are mixed. The site is without a doubt full of interest, history and the influences of various engrossing cultures. However, much of what there is to see has been damaged by war, time and the weather.

It’s the thought that this was once noisy, colourful and the aroma filled home to over 500,000 people. A city that had been powerful and important enough to be fought over is now gone forever.

One of the most exciting features of Merv for archaeologists and curious tourists is that it is made up of five separate cities from different ages of history.

You have to use your imagination to try and visualise what was once there. While the history of Merv is tremendous and by taking that chosen route we missed The Darvaza Gas Crater. Also known by the locals as the ‘door to hell’, is the number one tourist attraction in Turkmenistan.

It is apparently a sight to behold and one of the coolest things you can do in Turkmenistan.

During the Soviet Era, a group of geologists came to the Karakum Desert, not too far from Darvaza. They were intent on tapping into a cavern that was rumoured to contain a lot of natural gas.

They started drilling, but the earth beneath them gave way and collapsed. This resulted in a massive crater that not only consumed the drilling equipment but opened a huge gas hole.

Worried that the hole would give off toxic gas, the Soviets decided to light the crater to burn off the gas. What was thought at the time was it would only burn for a couple of days continues to burn to this day.