A Guide to Tajikistan

A guide to Tajikistan

THE ROOF OF THE WORLD

a guide to TAJIKISTAN

A Guide to Tajikistan

In the summer of 2018, we headed into Tajikistan from Uzbekistan. This country was one of my favourites if not my favourite country in the Stans. Tajikistan is 93% mountainous, known as the Switzerland of Central Asia, making it one of the most mountainous countries in the world. This is a guide to Tajikistan.

This country is likely to leave you breathless and I mean that literally and figuratively- much of the country sits at high elevations, so that lack oxygen is very real.

Well, below, I will try and explain why this is such a beautiful country and what you can expect when you go.

Before you go to Tajikistan

If you live in a former Soviet Union country, you will need a visa for Tajikistan.

These days, nationals of 121 countries can get e-visas online via the official Tajikistan e-visa portal. Do not use any other website. A single entry Tajikistan visa is US$50, plus an extra US$20 if you want to go to the Pamir regions as you need a GBAO permit, which we did.

Try to apply several weeks before you plan to travel to Tajikistan and make sure you fill it out correctly; there was a South African on the border who missed a digit on his e-visa and then when he arrived was not allowed in and had to wait in the waiting room for days, not fun!!!

Travelling through Tajikistan it is essential to carry quite a bit of money, ATMs can be hard to come by.

ATMs won’t always have some money available, and in places like Murghab in the eastern Pamir Highway, there aren’t any ATMs at all!

Many homestays, hostels and businesses accept dollars for larger payments.

It is recommended bringing US dollars to Tajikistan. How much you bring of course depends on your travel budget, but even though we were on a small budget, we bought several hundred dollars in cash when we were travelling into Tajikistan.

Pick up a Russian Speaking hitchhiker!!

One of the reasons for such an incredible experience was in Dishambe we met an Australian guy called Serge who spoke fluent Russian and was able to communicate with the locals as we moved through the country.

This meant we could joke with the guards, be welcomed into peoples home and understand what they are saying to us and ask for directions when we got lost.

Picking up one of these people I realise is a big ask but always worth learning a few words of Tajik or Russian to build rapport with the locals. 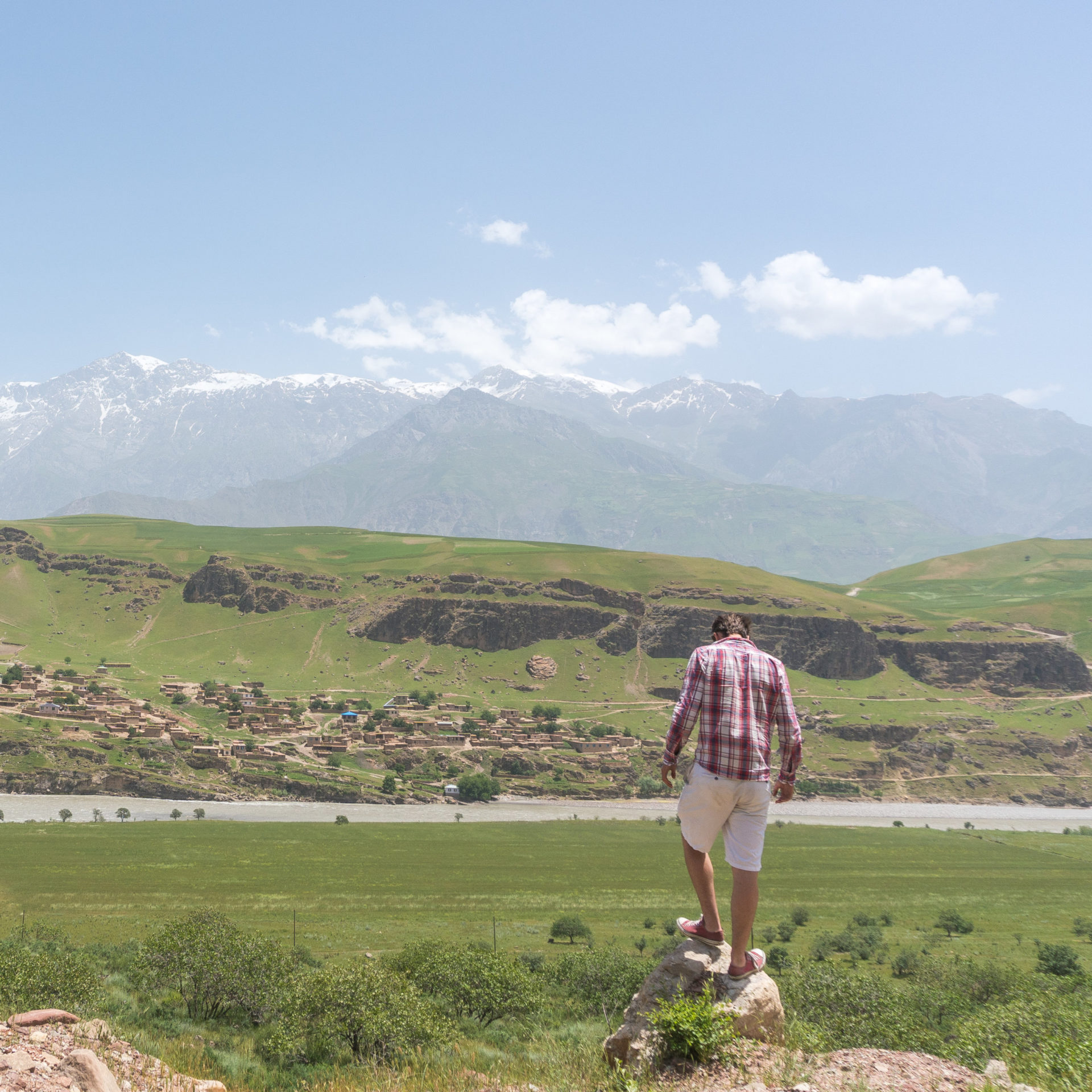 Our first view of Afghanistan

1. One of the World’s Greatest Roadtrips

Bam-i-Dunya, meaning ‘The Roof of the World’. This is the Pamir Highway, this is one of the world’s most incredible adventures whether you drive it, cycle it or walk it.

The Pamir Highway and Walkhan Corridor will take you up and over high altitude passes surrounded by snow-capped peaks and dotted with villages full of some of the warmest people who will stop at nothing to help you, bring bread and homemade yoghurt.

Of course, many a side trip can go from the Pamir Highway; We decided to head up the Bartang Valley for a few nights before coming back and then onto The Wakhan Valley.

The Pamir Highway goes through the most significant state of Tajikistan, the GBAO (Gorno Badakshan Autonomous Oblast).

Lunch at the Top of the Mountain

More people are making the journey to take in the views, but it’s still far from being considered touristy. The Fann Mountains, The Pamirs, Bachor, Pik Engels, Yagnob Valley, to name a few.

We headed up a few mountains in the Bartang Valley and along the Pamir Highway. The options are endless, and all will be well worth the effort. 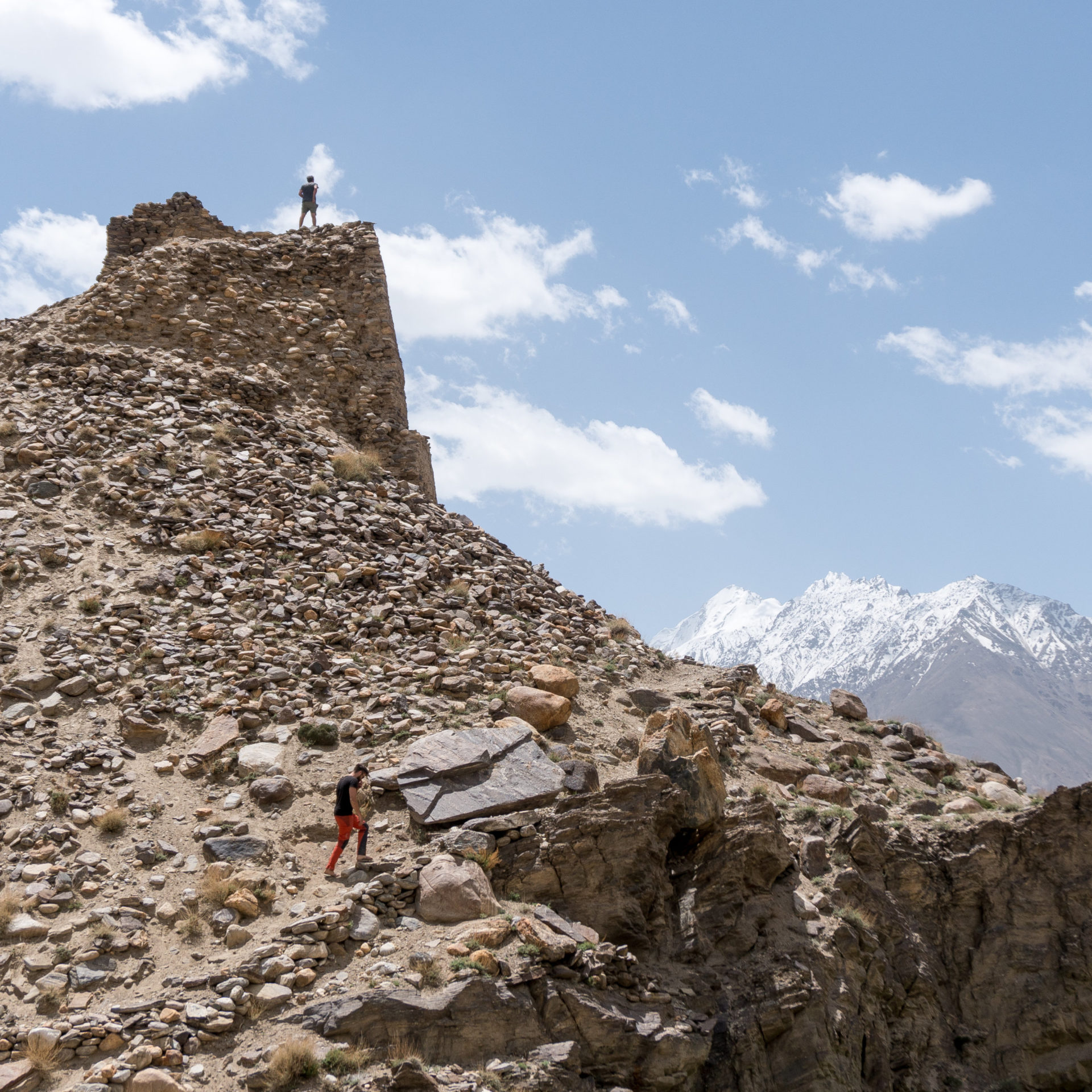 An ancient fort in the Wakhan Corridor

The people are what ties this diverse and magnificent country altogether. Over Tajikistan, you will be welcomed in by strangers who will insist on showing you unique Tajik hospitality.

Here people believe that you or a guest is a gift from the heavens and will go to considerable lengths to make sure you’re taken care of. In the Wakhan Corridor as we were setting up to camp we were kidnapped by three children who at first thought we were lost but wanted to show us their home and area, they then said we could camp on the grass next to their house but after that welcomed us in their home and gave us dinner.

This happens a lot to travellers. 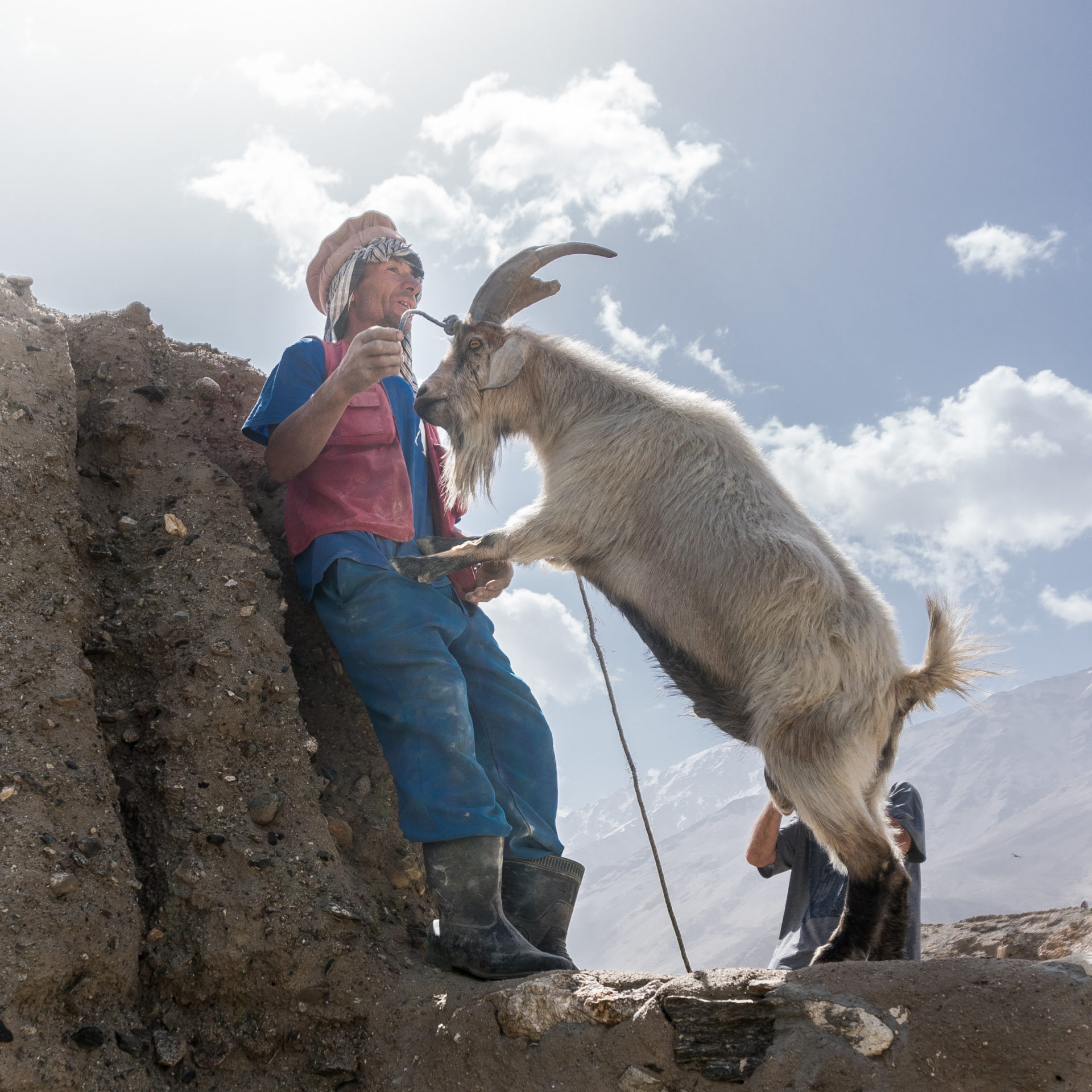 The Rudaki Statue in Dushanbe. Rudaki is an essential figure in Tajik Literary history, born in Penjikent.

While its most recent history has been on the tumultuous side, things have stabilised more recently. But the turbulent past makes for an exciting series of events that have led to the country of Tajikistan we know as today. Tajikistan has been under the rule of the Mongols, Arabs, Timur, Turkic, Persians and Russian, to name a few.

The Adventurer Marco Polo even took a stroll through Tajikistan. Tajik civilisation dates back at least 3,000 years albeit only having been an independent republic since 1991.

If you’re interested in the ‘Great Game’ the book about British Spies, there is plenty of places in Tajikistan to live out the history of the times when the Russians and British were vying for control of central Asia.

The Wakhan Corridor was where a buffer zone between the Russian and British Empire was created.

Tajikistan is diverse almost as much as its mountains are big. Of course, a country along one of the many routes of the Silk Road would be diverse. In the east side of the GBAO area, you’ll find the Kyrgyz nomads.

The Wakhan Valley you’ll find the Wakhi people practising Ismailism and with their own distinct Wahki language.

Around Khorog some people identify as Pamiri and have their own distinct language which is different from Tajik, The Bartangis tucked away in a beautiful and earthquake ridden Bartang Valley who speak the Bartangi language that is virtually unknown outside.

Then, of course, you’ll find ethnic Tajiks more into the west of the country.

To see the living history you can visit the Yagnobi people of the Yagnob Valley along the southern slopes of the Zeravshan Range.

There are also large Tajik population outside the country, especially in Afghanistan and Uzbekistan. 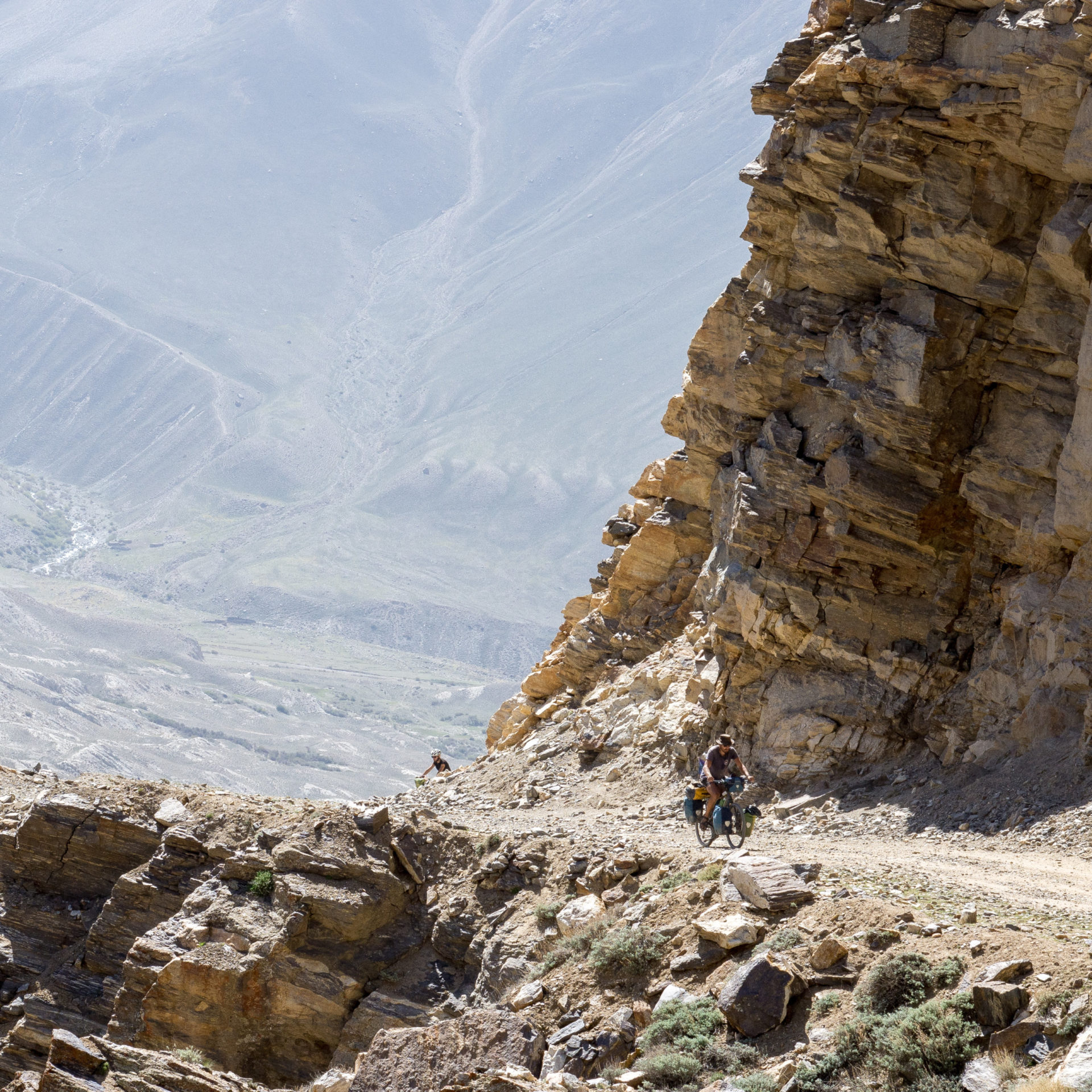 Cyclist heading towards the Pamir Highway

If you manage to get to Tajikistan, you’re already off the beaten track! The adventures to be had here are of course endless, from death-defying roads to poorly lit 5 kilometre long tunnels, high altitude treks, cycling broken roads and camping with some of the most stunning views through the high Pamir, kayaking across crystal clear lakes, skiing the river bed.