Warsaw Itinerary – What are 7 best things to do

SEVEN OF THE BEST PLACES IN WARSAW

A GUIDE TO your PERFECT Warsaw trip

I’ve spent three days in Warsaw recently, and I’ve come back, packed with an appreciation for the destination I didn’t expect.  Here are seven things not to miss in Warsaw and to add to your Warsaw Itinerary.

Before my journey, I hadn’t heard about Poland’s capital before, but cheap flights and an invitation attracted me to book a city break in Warsaw, and I’m so happy I got a chance at that city.

If you’re curious how many days you’re going to need in Warsaw, so I thought three days was the right time. Without feeling hurried, we were able to get to all the best places to do in Warsaw, and this was made simpler by the fact that the city is super easy to get around. 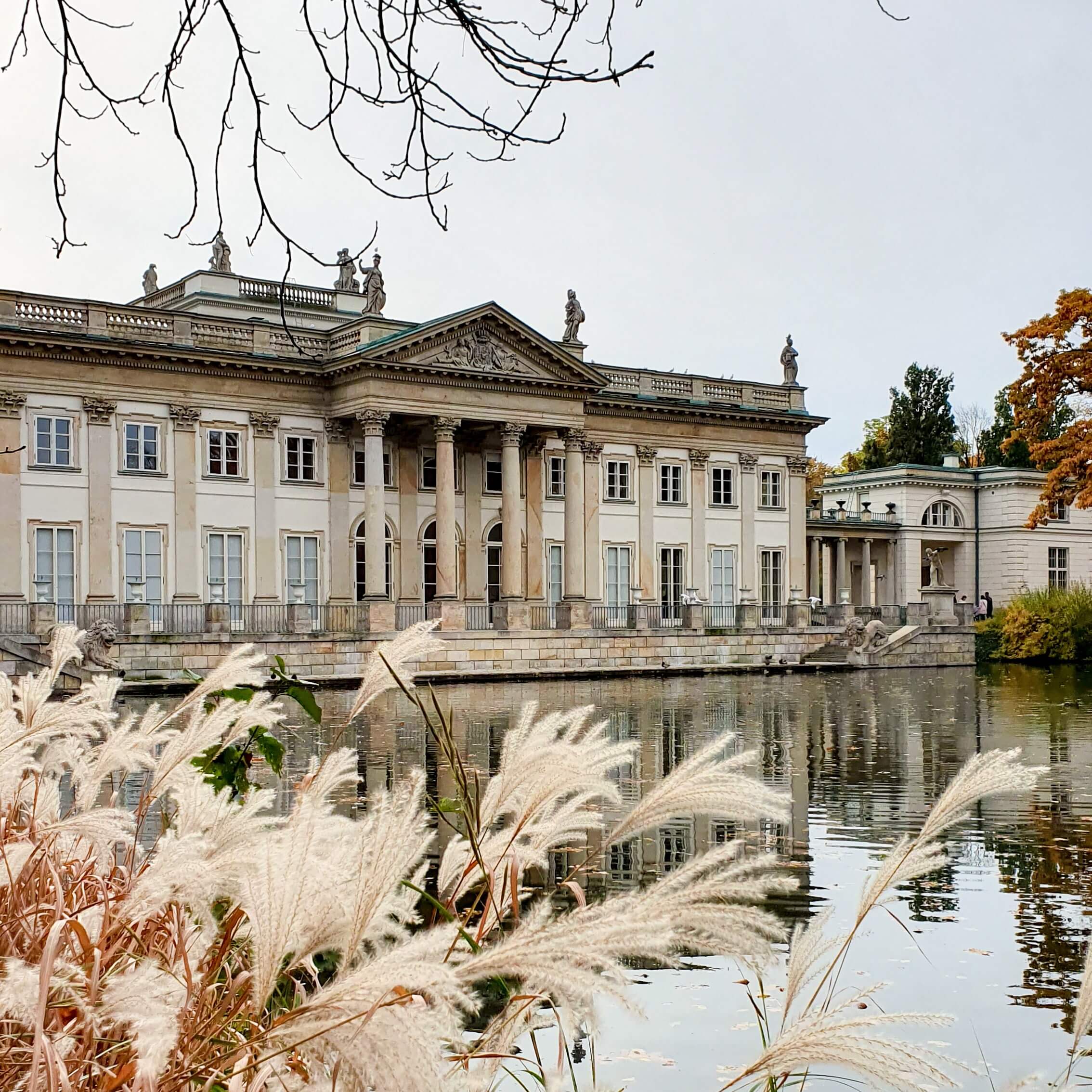 It is Poland’s most significant park in Warsaw and covers 76 hectares of the city centre. The park-and-palace complex is situated in the central district of Warsaw (Čródmieście) on Ujazdów Road, which is part of the Royal Route that connects the Royal Castle to the southern Wilanów Palace.

Originally built as a bath park for the nobleman Stanisław Herakliusz Lubomirski in the 17th century, the last king of Poland, Stanisław II Augustus, turned Łazienki into a place for palaces, villas, classicist follies and monuments in the 18th century. It was declared a public park officially in 1918.

Tourists from all over Poland and the world visit Lazienki and serve as a place for music, arts and culture. This fantastic park is also home to many peacocks and squirrels.

This park is a must to add to your Warsaw Itinerary.

The old town of Warsaw is one of the most recent in Europe.  Reduced to rubble by the Nazi occupiers in August 1944 (they took exception to the decision of the citizens of Warsaw to strike back in the same month’s Warsaw Uprising.

Check out the excellent Warsaw Uprising Museum to learn more), the city lay in ruins – but not forever.

Painstakingly restored from memories and photos, many of the more critical structures have been rebuilt almost entirely to their original configuration, and the city maintains a historical feel with its lined streets and beautifully painted houses.  Today it’s one of Warsaw’s most famous places to visit.

Check out the landmark Market Square with Warsaw’s very own Little Mermaid statue – a rather more combative version than her sword-shielded Copenhagen counterpart, she has become the city’s symbol.

Visit the magnificent Gothic St. John’s Archcathedral with its distinctive stepped vaulted roof; a stone commemorating 1000 years of Christianity in Poland is outside the cathedral. Or stroll through the streets and take in the scenery.

The old town may have been rebuilt but as a result, visitors can enjoy the grandeur of the buildings as they would have been when they were new in the Middle Ages. 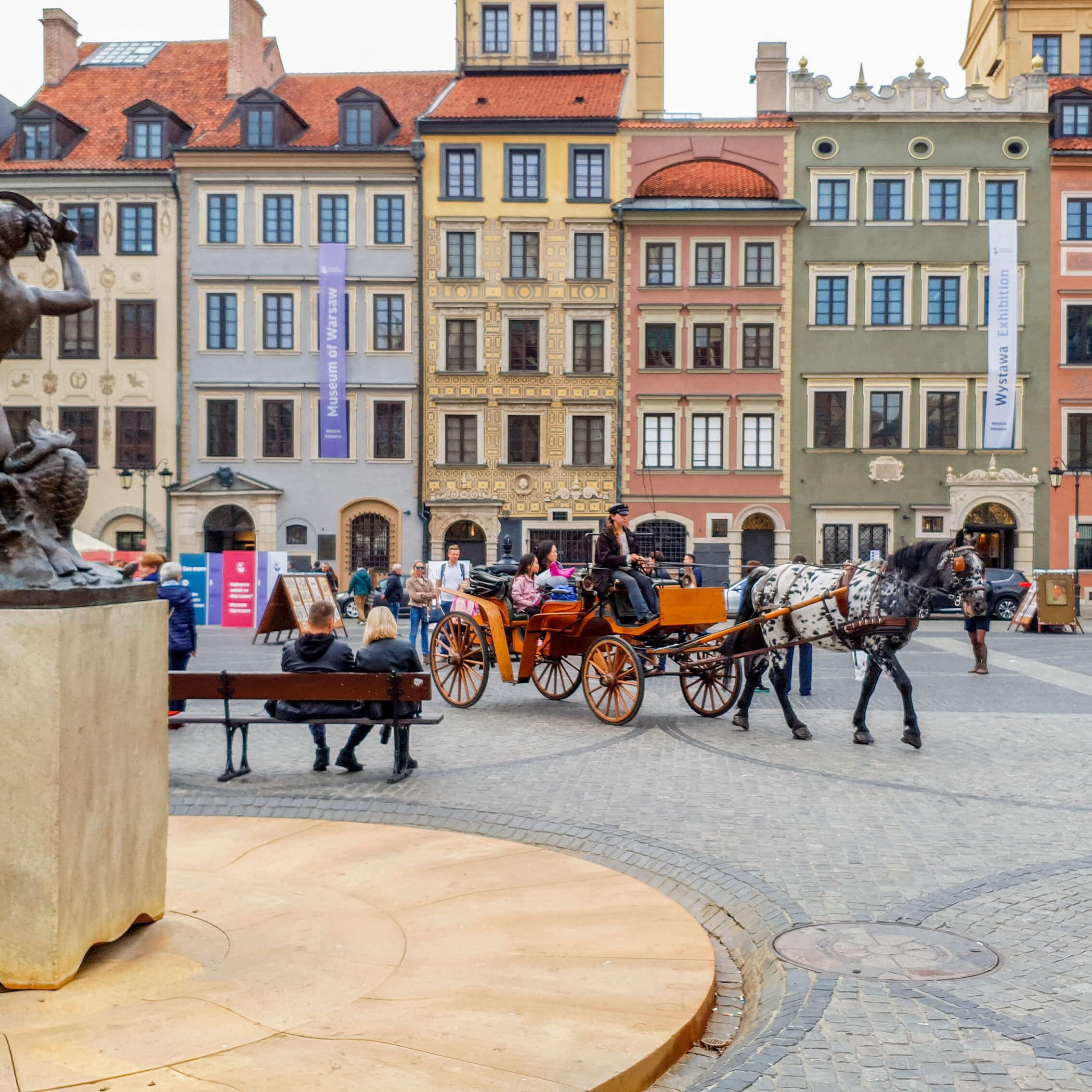 The Royal Castle of Warsaw, at the outskirts of the Old Town, is another structure that was restored after World War II.

Fortunately, however, the city’s people anticipated the arrival of the German forces, and many of the priceless contents were securely hidden away and remain today, including the stunning golden throne and a magnificent room full of Canaletto paintings, which enabled the visit.

But the Castle itself has also been lovingly restored to its former glory; stunning parquet floors carry tourists through the royal rooms, including a ballroom to rival anything at Versailles with its glittering mirrors, golden ornamentation and dazzling ceiling mural, repainted by a contemporary artist as similar to the original as possible.  The palatial apartments giving way on the ground floor

Take a cruise on the Vistula River

For a capital city, the river of Warsaw is remarkably undeveloped. It is a key feature of the city.

While significant, navigation is shallow and challenging, so the only boats accessing these waters are smaller vessels, rendering a river cruise a great way to relax and admire the leafy banks of the river and the skyline of the city beyond. 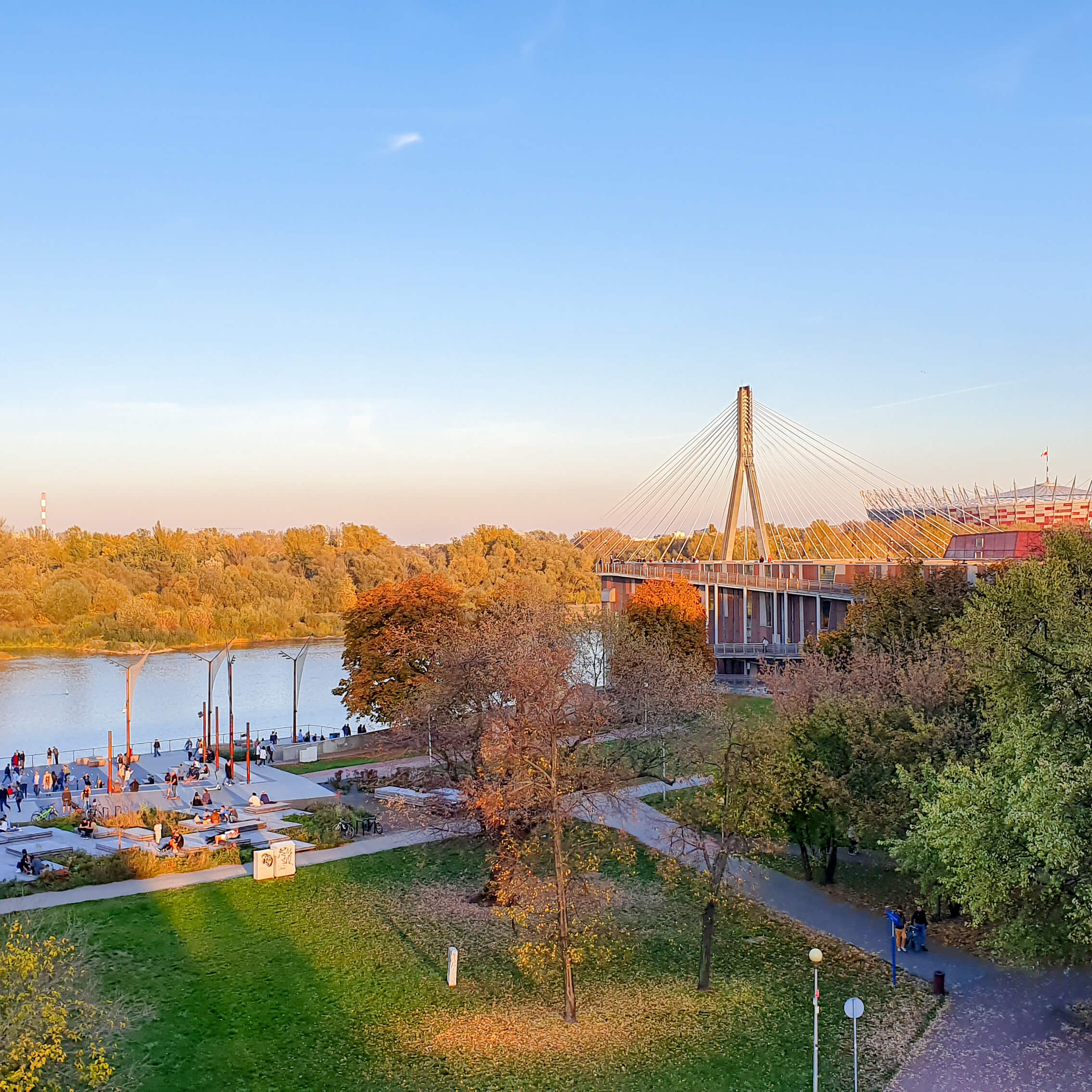 Check out the view from the Palace of Culture and Science

The Palace of Culture and Science is easy to see, recognised locally, with a good dose of irony, as Stalin’s Gift.

Designed in the triangular “birthday cake” style so favoured by the Soviet dictator, this 1950s skyscraper was introduced by the man himself to the City of Warsaw, allegedly as a gift, but in fact as an unwelcome reminder of who ruled the world during the Communist period.

You don’t reject presents from Stalin, but the city’s inhabitants took it into their own hands and determined they would make it bigger
and larger if they had to make it, and today’s house standing on this site is double the height of the initial proposal.

The skyscraper, containing theatres, cinemas and many other jewels for the pleasure of the people of Warsaw, is a fine example of communism.

Ride the elevator to the observation room to see for yourself the interior of the Palace; there are impressive views in the distance from the roof to the Old Town and Water, as well as the mini-Manhattan of Warsaw’s new business district as it expands every day. Add this to your Warsaw Itinerary and you won’t regret it.

Sixty years on, the Culture and Technology Palace remains the city’s tallest structure – but not for long.

Learn the tragic history of the Warsaw Ghetto

It’s hard to come to Warsaw to disregard the tragedy of the Second World War. More than 400,000 Jews lived in the city at the time of war and the Nazi settlers were able to take them under their immediate control, establishing the Warsaw Ghetto in late 1940.

The Ghetto, in the city’s Muranów neighbourhood, occupied a wide area but not large enough for the number of residents, who were housed in a space with an average of over nine people.

About 92,000 Jewish inhabitants died of malnutrition and illness in the Ghetto, while more than 300,000 were killed in the death camps by gas or firing squad. Mostly the Treblinka camp, to which about 250,000 inhabitants of the Ghetto were dramatically sent in the summer of 1942.

The remainder of the inhabitants started fighting back in 1943, resulting in the late April Warsaw  Ghetto Revolt, in which the surviving Jewish inhabitants were either killed or sent to concentration camps.

The Polish Jewish History Museum (POLIN) is situated within the  former, unreconstructed ghetto area and today contain more new buildings.
Well worth a visit to the museum; prepare for at least 2 hours.  A memorial to the Polish Jews and the Warsaw Ghetto Rebellion stands outside the museum. 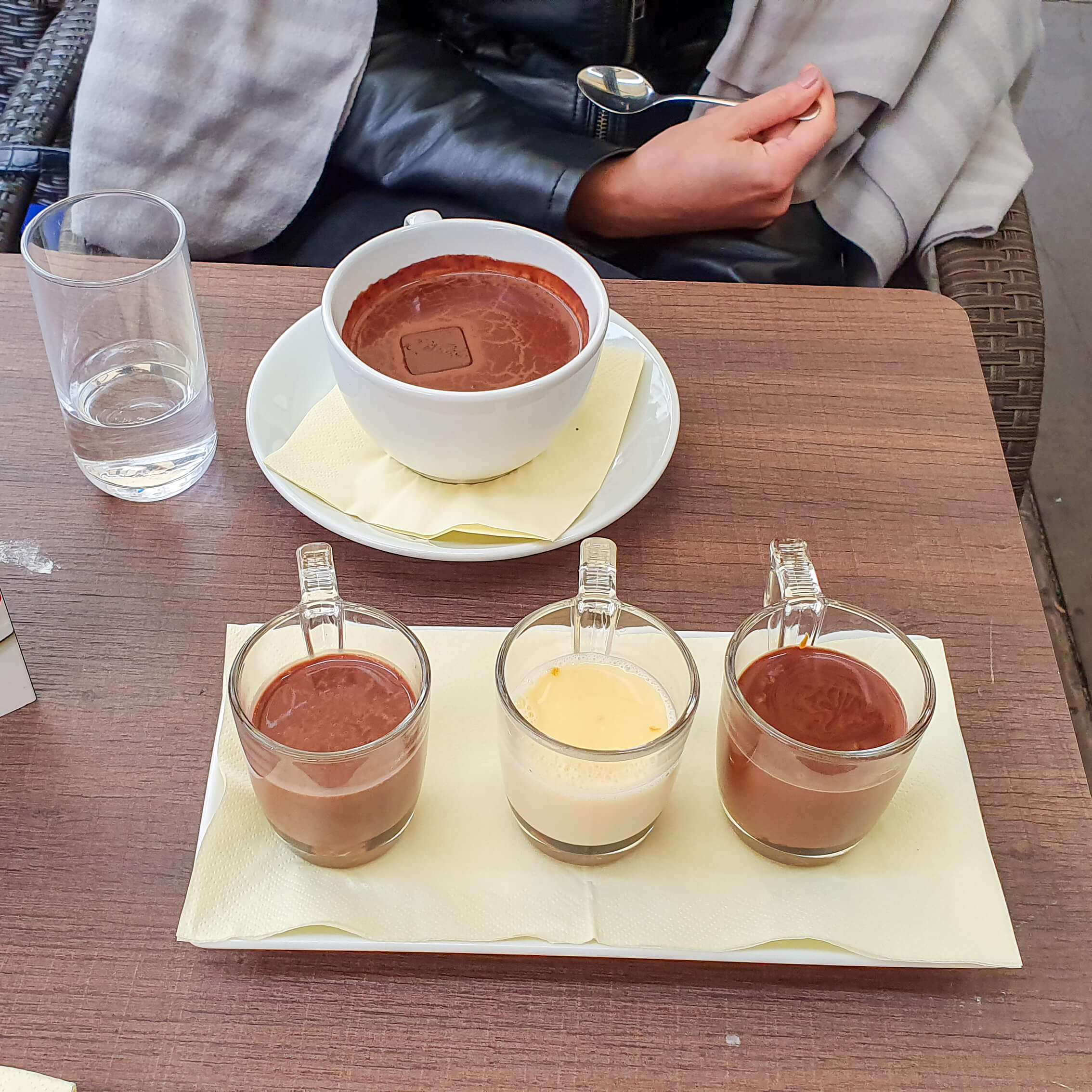 Sampling some of the Polish cafe’s

Stuff yourself full of traditional pierogi

Last but least is to explore and try all the foods Warsaw has to offer. International foods reign supreme in modern Poland, but there is a taste for real Polish cuisine.

A tradition in Poland is the ubiquitous pierogi, small dumplings traditionally made with local cheeses and potato or meats and sauerkraut.
This food is found in many restaurants, but most prominent in the Old Town, where restaurants such as Gościniec and Zapiecek offer the opportunity to sample this part of Polish life. Worth checking out.

My Warsaw itinerary includes all of Warsaw’s great things to do from where to eat, drink and sleep. Here is a list of places to stay in Warsaw.

For more posts on Europe check Out

Looking to create your own Adventure? Pin this post for later! 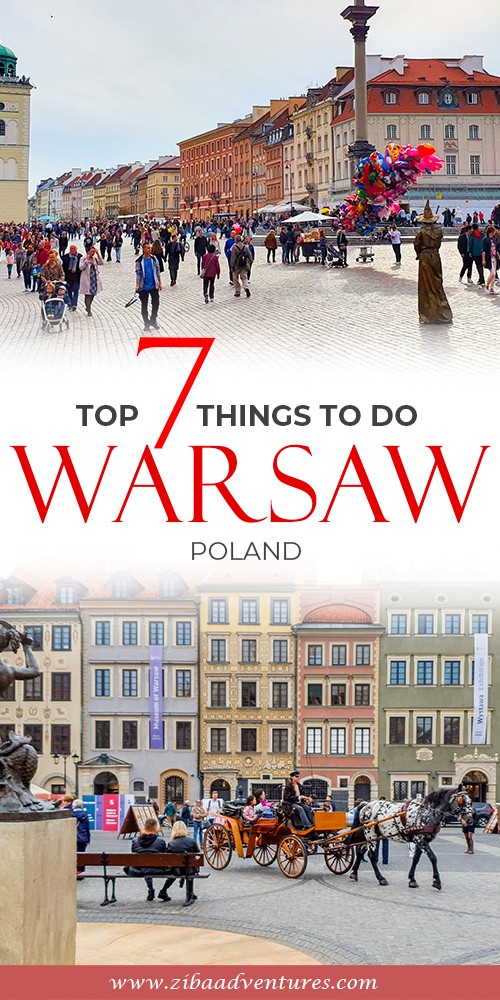 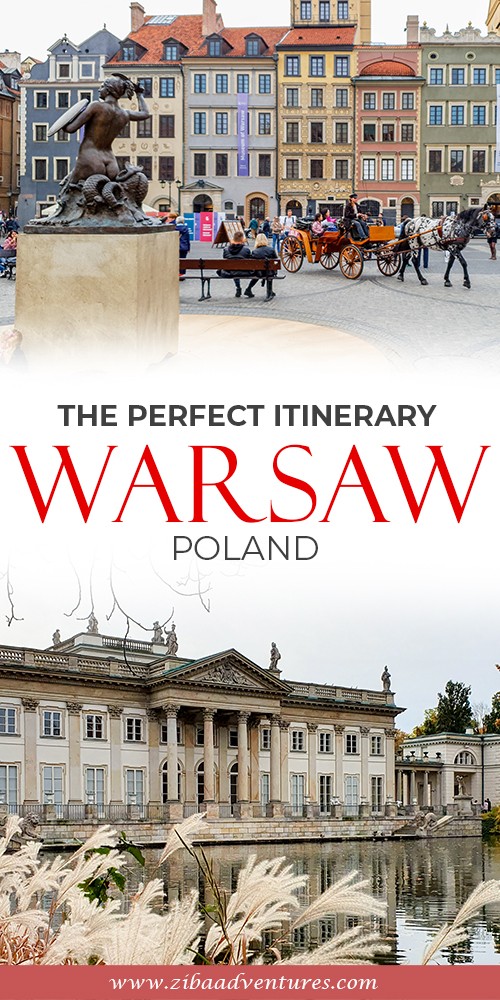 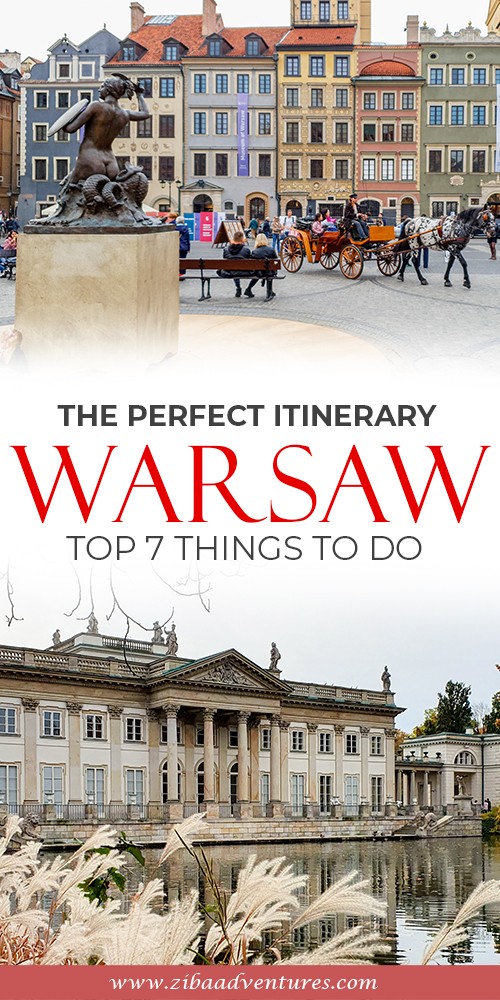