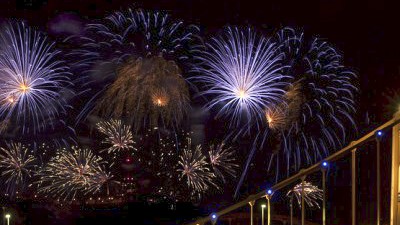 Today was the first day off the saddle and my word, did I make the most of it. I stayed in bed till about midday before getting up and doing some bike maintenance, three days in the woods had taken a bit of a toll on my bike which had now become a little muddy and a little dilapidated, and not to mention the state of my clothes too! I headed into to Pittsburgh in the afternoon to see what delights it had to offer.

I was told of how Pittsburgh puts on a special event for the 4th July, and how much fun this Regatta was. Having watched the Regatta at Henley on the Thames, I was imagining people rowing down the river in a tranquil and peaceful spectacle, people getting sloshed on Pimms would probably barely notice the boats. However, in America, Regatta means a whole new thing. We were welcomed to start with by The super riches Super Yachts being a parade down the river followed by an adrenaline-fueled powerboat race for twenty minutes, this was then followed by an elaborate fireworks display unlike one I rarely see back in Britain. Having grown up in the Countryside, fireworks night was usually one person running from one firework to the other while we watch patiently in the freezing cold. This tonight was a whole different ball game. I chatted to the locals after and went for a few drinks in the bars. A fantastic evening in Pittsburgh and cannot wait for what America throws at me next.